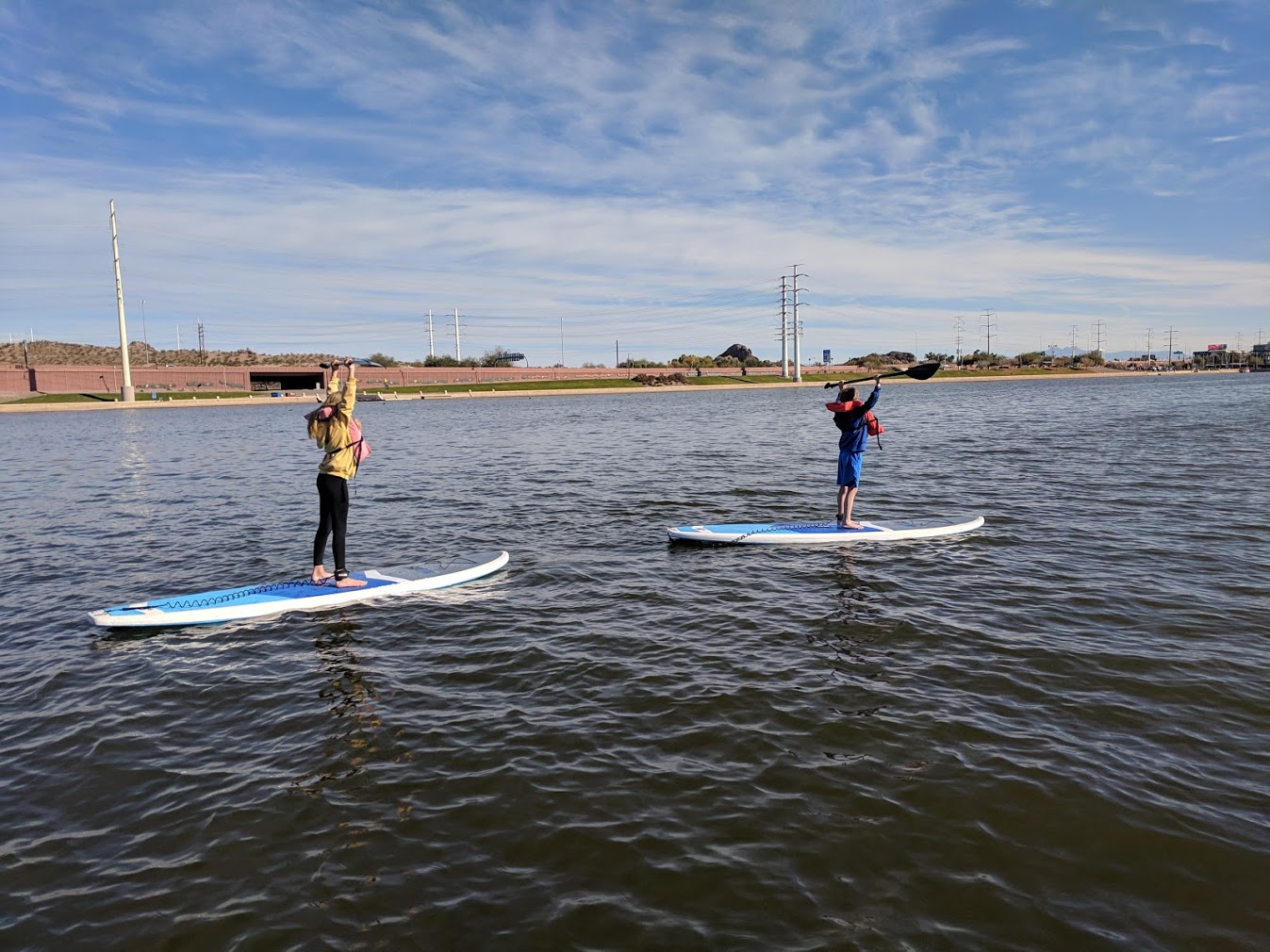 The air was cold. The wind was calm. The skies were clear. And it was January, so there was a high likelihood we’d have the winter water almost to ourselves.

It was a perfect day to teach the kids how to paddleboard.

They weren’t wearing swimsuits under their hoodies, they’d tell me as we walked toward the Tempe Town Lake marina. And, wouldn’t their feet be cold?  And wouldn’t we need towels? Who would hold our shoes? What if they fell in?

Since I had made stand-up paddleboard a habit in recent years, it was easy for me to tell them to relax. This was an adventure that was owed to them, left over from a fall birthday surprise, and it was time to punch the ticket.

“I take you to do things I know you can do,” I told them, which seemed to temper their seemingly bottomless pit of questions.

They had seen SUP and were familiar with it, from photos of my time on the water and from visits to the California coast. They knew what they were in for, which is probably what triggered all the questions. That, and they thought for sure they were kayaking, which must have seemed less daunting for a still undetermined reason.

Stand-up paddleboard is not something most people think of when considering outdoor recreation in the desert. Yet, there are so many opportunities to do it, each with a unique landscape as its backdrop. And I’m told, but have not yet experienced, that sunset paddles are the most magical. 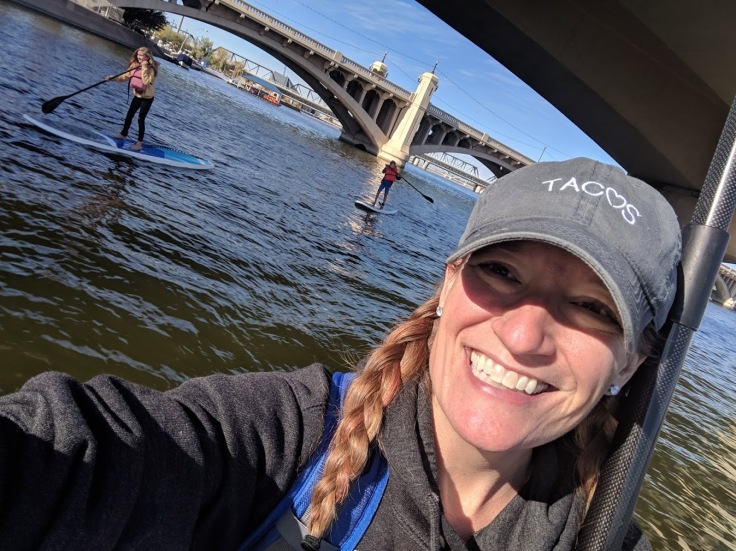 We could have gone to Canyon Lake, drove up to Prescott, or paddled at Lake Pleasant. But for these beginners, Tempe Town Lake provided a wake-free proving ground for kids who had not yet received a primer on the finer points of paddling. And, it was close. And, on sale, which was an unexpected bonus.

Here are a few takeaways from our maiden voyage, where everybody stayed dry.

They can do it. I already knew they could, but they proved it to themselves by leaving any hesitation on the dock and climbing onto their boards with spirited curiosity and a giddiness that only comes from stepping outside your comfort zone and not knowing what could happen next. Josie is 12 and Dominic is 10, and both had the physical strength, stamina and ability to balance on and paddle the boards. I got onto my board first, which I would recommend with kids, so they could see how to do it. I stayed on my knees for a bit, as did they, and then we all popped up, paddles in hand, dry as we were when we walked to the marina. 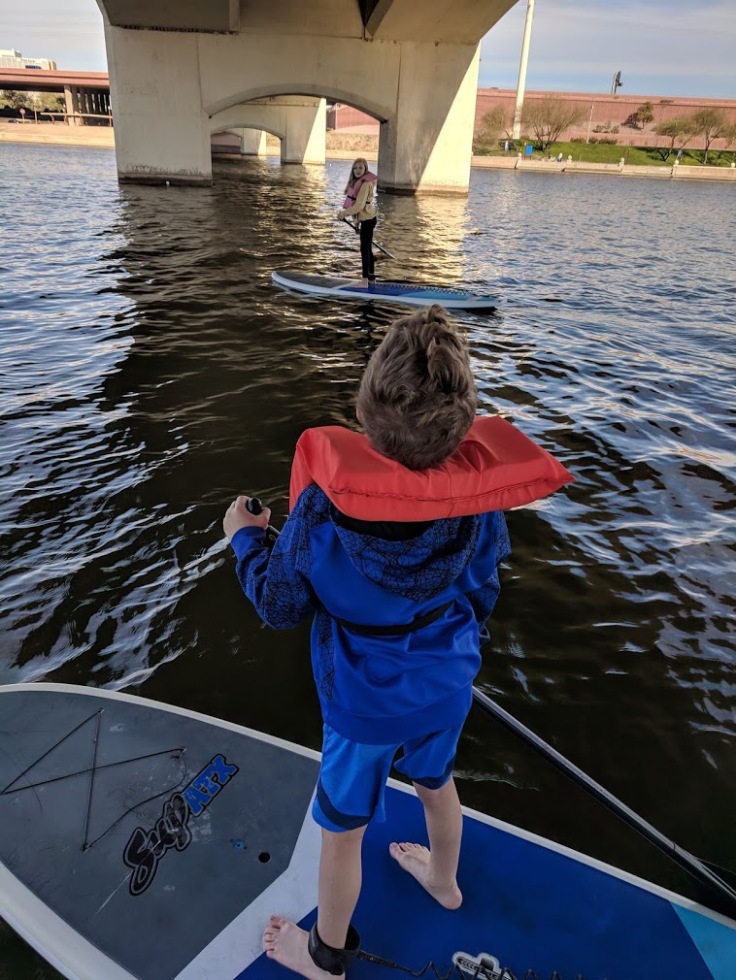 Bring a pack. Whether you’re paddling alone or with kids (probably especially with kids), it would be helpful to bring a daypack. Just one. Use it to carry everybody’s flip flops, your keys, a water, and possibly a dry bag for your phone – just in case you do tip. While we usually advocate for kids to carry all their own gear, they are required to wear life vests while paddle boarding, and a backpack on top of that would be a real drag. If you don’t want a pack, some docks offer storage lockers.

Paddle on dry land. We failed to go over paddling basics before we got on the water, because they were so focused on how to stand and remain balanced. But, more than once, I found myself having to coach one of them through a U-turn, which can be confusing on the water. Show them the basics before you step off the dock, and be sure to include the benefits of a reverse paddle, which will get them turned around quicker. And don’t panic if they float away from you. If you do, they will, too. Just paddle their way, and get them straightened out. 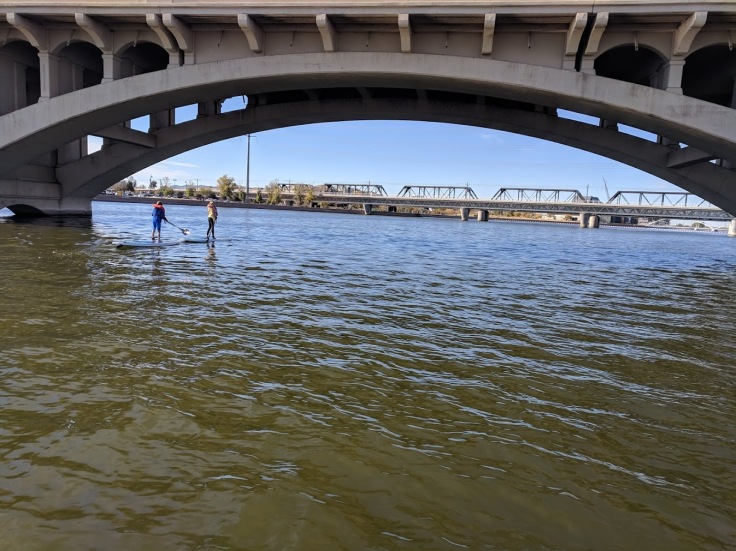 Show them how to stop. Despite bumping into each other, and the wall of the lake, a few times, these two never lost their balance. They were lucky, I think. Before getting into the water, show them how to use their paddles to avoid a collision, with each other or something else. 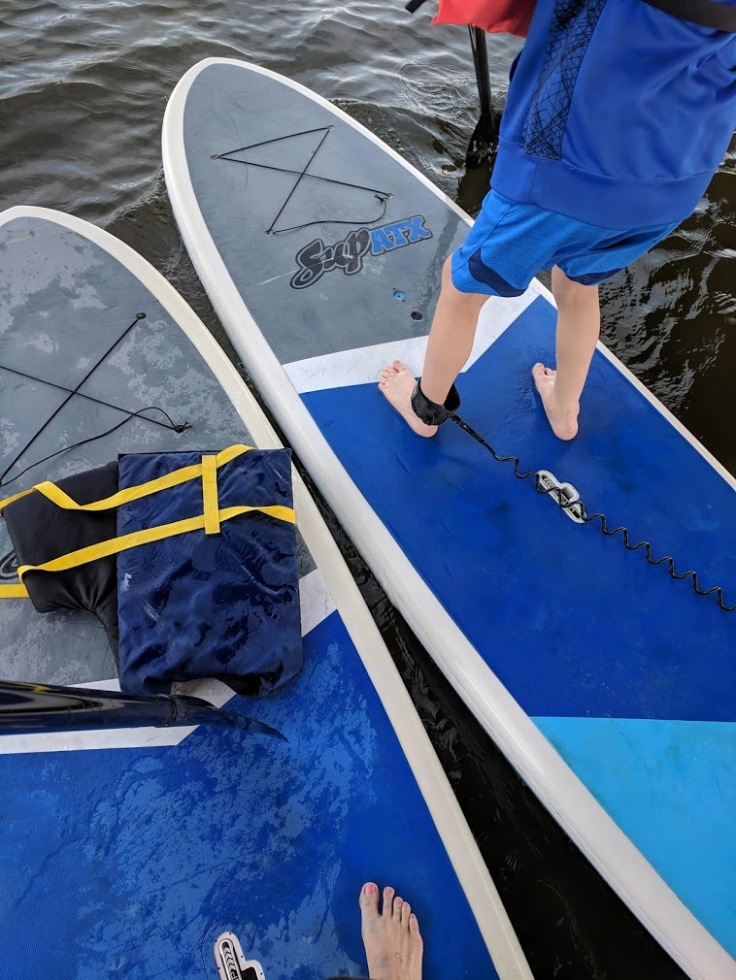 Let them be kids. For sure, they need to follow the rules of the marina or lake they’re in, but there is no doubt they will discover that their paddles do more than move them. They are also vehicles for splashing. Let them. Let them go ahead of you or behind you. Let them explore the water and their own strength. Let them laugh and holler to each other, even if it’s loud, because outside they can use their “outside voices.” And on the water, riding a board, they can be their own little navigators, especially once they learn that they can do it. That they don’t need towels. Or swimsuits. Or answers to every question before they get in.